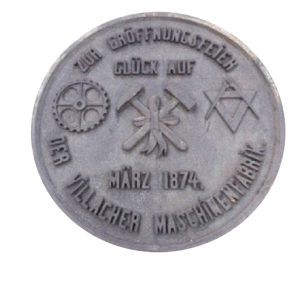 The KMF history started on the 3rd jannuary in 1874 as Josef Anton Egger together with his partner Anton Moritsch founded the Villacher Maschinenfabrik. The production of that time was state of the art, manly machines for the mining, the iron and steel and the saw mill industry were produced. Within the first years in business the company employed already up to fifty employees, thus being one of the biggest firms in the area.

The mastermind Josef Anton Egger was well ahead of time, due to the changes he had encountered when visiting the World Trade Exhibitions in London (1851), New York (1853) and Paris (1855), when he joined forces with several small local companies to be able to compete with the growing, more globalized industries. With these other small companies he merged into the Bleiberger Werksunion (BBU).

After the death of Josef Anton Egger in 1886 his son Johann Baptist Egger took over the CEO of the company. In a fast growing and very prosperous time of the firm Johann Baptist Egger´s managerial career was ended by his sudden death; making his younger brother Dr. Othmar Egger chairman of the board.

At this time Dr. Othmar Egger, a lawyer, recruited Burghard Holzer from the bohemian Skoda company to assist him in technical matters. Burghard Holzer became CTO, steamlined the production processes and started with the manufacturing of the first high-tech machines as well as tank manufacturing. Meanwhile the company had more than 150 employees on its payrole.

After World War I Dr. Othmar Egger took over the shares held by the successor of the former company co-owner Anton Mortisch. This was the first time in the company´s history that all shareholders were familymembers. Due to the economic crisis starting in the end of the 1920s the Villacher Maschinenfabrik reduced its workforce to cut costs.

When Dr. Othmer Egger died in 1931 his two sons Dipl.-Ing. Othmar Egger and Dr. Wilhelm Egger became the new CEO´s of the company. They faced fierce competition trying to bring the company back into the black figures. Just before World War II began, they merged with two local industrial engineering companies form (Villach, Klagenfurt and Seebach) to the KMF – Kärntner Maschinenfabriken to strenghten their position among their competitors and increase their market share.

World War II had terrible effects on the new company, as the subsidiaries in Klagenfurt were completely destroyed, and the headquarter in Villach was severely damaged. The board decided to restart production only in Villach. The production technologies from the other subsidiaries were transferred to the headquarter. This combination of different technologies in one place lead to breaking innovations in the fields of agricultural equipment, thus making KMF a well known European manufacturer for the so-called turning plough in the late 1960s.
Some of the inventions were the automatical turning facilities for ploughs, which were used by nearly 95% of the European agriculture, making them licencees of the KMF technology.

The reduction of the agricultural output in the 1970s lead to difficulties in sales in this area. In these times of depression the successors of Moschner and Fitzek-Haber sold their shares to the two Egger brothers, again bringing back the ownership of the company to the family.

In 1978 the daughter of one of the CEO´s, Dr. Monika Egger took over the company leadership from her father and her uncle and started a huge restructuring and reorganization program, while founding two new companies. She changed the production thechnology with the new core competence laying in industrial engineering and environmental industry, thus being able to maufacture in one company and assemble in the other two.

Today under the leadership of the fifth generation all companies of the KMF-Group are sucessful players in their worldwide markets, thus being able to offer its customers in-depth knowledge from the layout to the construction, engineering and manufacturing to the assembling.